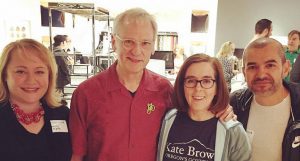 The brunch was a kickoff to Sunday’s nearby PRIDE Parade. After the brunch, Laurel joined others at The Society Hotel to watch the parade, celebrating LGBTQ pride, and solidarity in the community.