SK&H has put together a list of exciting and entertaining events for you to enjoy this weekend. Everything from spotting celebrities and cosplayers at the Rose City Comic Con to dressing in your best Renaissance gear and heading to Corvallis, there are plenty of cool and unique ways to spend Saturday and Sunday.

“Keep Portland EXTRA Weird” could be the tag-line for Portland Institute of Art’s complex and completely thrilling multi-disciplinary Time-Based Arts Festival that runs now through September 18. Artists from around the world display contemporary performance and visual art at the Time-Based Art Festival, which includes workshops & evening shows. It’s weird. It’s wacky. It’s worth your time.

Cost: Pass that includes 6 tickets to main stage performances of your choice, $150. Other options also available.

Fans of comic books, games, sci-fi, and pop culture can meet artists, celebrities, and publishers at Rose City Comic Con in the Oregon Convention Center. With one of the most…okay…weird line-ups ever created for a Portland con, this is the place where you can see John and (his sister) Joan Cusack as well as the men who fill the shoes of iconic Star War characters Chewbacca and BB-8. Speaking of icons, the legend, Stan “the Man” Lee will be at Rose City Comic Con! Stan has been involved with Marvel since practically its inception creating and co-creating some of the biggest characters in comics and pop-culture. In his collaboration with Jack Kirby & Steve Ditko, they created Spider Man, Hulk, Iron Man, The X-Men, and the Fantastic Four to name just a few! This will be Stan’s last appearance in Portland and Rose City Comic Con. 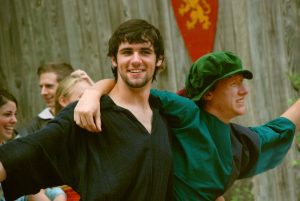 Watch knights joust on noble steeds, mingle with costumed minstrels and troubadours, shop 125 artisan and food-purveyor stalls, and see children delight in games and adventures at Shrewsbury Renaissance Faire in Kings Valley just outside of Corvallis. The only Fair of its kind in Oregon, its modeled on the merriest of elements from the times of Shakespeare and Elizabeth I, and set in the historic renaissance of 1558 to 1603, here all the Faire is a stage, and everyone a player!

The 2.4-mile AIDS Walk Portland to raise awareness of, and funds for, the fight against HIV/ AIDS includes music, entertainment, a kids’ corner, and a beer garden for the adults. The walk starts and finishes at Fields Neighborhood Park.