The months may be changing like the seasons, but that doesn’t mean there aren’t things to do! These SK&H picks are sure to make your Portland weekend an event-filled one.

With 2 appearances on Conan’s talk show, a Comedy Central special, and the New York Daily News calling him “one of the four funniest in New York”, this NYC stand-up comic is making rounds nationally and this weekend he’s stopping by Portland!

A fan of IPAs, pale ales, or just beer in general? The 13th Annual Portland Fresh Hops Fest is happening this weekend, and with 59 hoppy brews making an appearance, it’s sure to be a tasty one. The event will also feature food from Monk’s Deli and the Urban German Grill. To add to the entertainment, Oaks Park rides will be open from 12 pm to 7 pm on Saturday, and if you have a well-behaved pooch, dogs on leashes are also welcome.

The Graduate
Through October 2nd, 2016
The Venetian Theatre

An adaptation of the 1960s novel and film of the same name, The Graduate stage play follows Benjamin Braddock, a recent college graduate who has come home to live with his parents while at the same time trying to dodge that dreadful question- “What do you want to do with your life?” The life he’s trying to figure out takes a turn when he’s seduced by Mrs. Robinson, a bored housewife. And that’s just the beginning of the story, with many complications that are worth to see through. Just remember that with the scenes, materials, and humor, this is considered an adult play and may not be appropriate for everyone.

Jekyll and Hyde The Musical
Through October 16th, 2016
Brunish Theatre

What happens when you take a classic story by Robert Louis Stevenson and add some pop rock hits? You get Jekyll and Hyde The Musical of course! This performance tells the tale of a doctor who’s also a madman due to his experiments, and the women who are in love with his different versions. The musical opens this weekend and continues weeks into October. 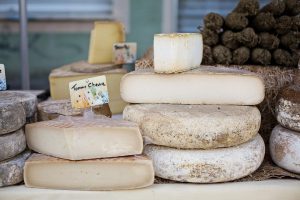 Cheese, that’s all. But if you must know more, The Wedge is an event stuffed with cheese sampling as well as the food and beverages that pair with it. If that isn’t enough to capture your interest, you can also try your hand at cheese wheel bowling. Proceeds of the event go to the Oregon Cheese Guild so that many cheese delicacies can continue to be made and shared.