Kent could be talking about being an attorney and Managing Shareholder of Stahancyk, Kent & Hook P.C. in Bend, Oregon. But in this case he is referring to being recognized as the 2016 Outstanding Male Junior Coach of the Year by USA Volleyball.

During his early years, coaching volleyball at various high schools and clubs was a way for Kent to pay for college, but that part-time job became part of his life. In 1998 SK&H expanded to Bend, Oregon. That’s where Kent became a partner in the prestigious law firm. At that time, he was asked by a relative of a former player to coach the Rimrock Volleyball Club in Prineville, Oregon. That meant driving two hours’ round trip for every team practice. Now, for nearly two decades, Kent still makes that drive. He does it for the team.

Rimrock Volleyball Club in the Columbia Empire region, one of 40 volleyball regions in the United States. The team is made up of high school girls, freshman through seniors, and consistently competes with other top teams from around the nation. 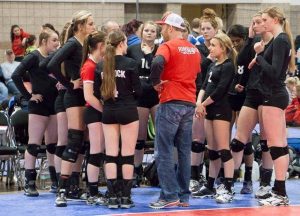 A fierce dedication to pursuing excellence in their chosen sport is helping train these players for life. Whether it’s pursuing State championships, working at the Stahancyk, Kent & Hook Bend office with Kent, or raising money to help pay for club expenses, the team focus their energies on building up their character and self-confidence on, and off, the court. With over three million dollars in athletic scholarship funds received for his student-athletes, Kent’s players continue their schooling and take their positive character and life experiences to the collegiate level and beyond.

Kent’s experience doesn’t stop with coaching. He also sees a resemblance in situations at the law firm. “[In volleyball and lawyering] There are similarities in handling stressful situations and handling pressure,” he said. “You control your performance by your preparation, both on the volleyball court and in the courtroom.”

Kent’s lawyering experience and skill at handling pressure shows as he has also been elected to the “2016 Oregon Super Lawyer’s Top 50 List.”