SKH Vancouver Get to Know Our Historic Vancouver Location

Every house tells a story. SKH Vancouver location, The Historic Charles Brown House, has one unlike any other. Constructed in 1866, the building is listed with the Clark County Assessor’s Office as the oldest building in the area. Several changes have been made to the house, but Jody Stahancyk’s passion for preserving historical landmarks in their most original form is brilliantly apparent throughout the building.

THE HOUSE THAT COOK BUILT by Vince Roman

Vancouver, still a part of Washington Territory during the 1860’s, was anything but upscale and cultured. Most homes were nothing more than modest cabins sprawled amongst undeveloped land. Frontier-like, so to speak. This particular home, which stands at the corner of 11th and Daniels Streets, was a masterpiece rising mansion-like among the settler’s more humble homes. Aside from the architecture, the people who have resided in the house over the years create a uniqueness of its own. The house has undoubtedly been home to some of Vancouver’s most influential citizens including pioneers, politicians, a banker and teachers. Yet, its true origins remain a mystery. Let’s explore the origins of the house and the lasting impact one man involved with it left—Alonzo Cook.

The story of the house begins in the most unlikely of places, Portland, Maine. Alonzo Gerry Cook was born in Portland on May 13, 1839. He spent his early years there, but during childhood moved with his parents to Illinois, eventually settling about 60 miles from Chicago. After his formal schooling he graduated from Lombard University in Galesburg, Illinois and also attended Union Law School. Shortly after law school, he met and married his wife, Miss Isabella Webster. Isabella originally hailed from London, England and made her way to America by a sailing vessel some years earlier.

Soon they embarked on a six-month wagon journey west in search of adventure and prosperity. Their travels eventually lead them to Vancouver, but not without hardships along the way. They lost cattle and endured geographical obstacles, most notably the Snake River. In a sense, it was a miracle they even made it as far west as they did. Nonetheless, their determination continued. A quote from Alonzo taken from the Thurston County Pioneer early history outlines one of the many struggles on his journey west:

“We took off the wagon bed when we came to the Snake River, unloaded our plunder and my wife spared a garment and I spared another to tear into strips. With this we caulked the wagon box the best we could and put it in shallow water to soak overnight. In the morning, partly loading our equipment in the box, we started to paddle over. I steered and rowed the extemporized craft the best I could, but the water rushed in in spite of our caulking, so my wife bailed for dear life till we landed on the far shore.”1

After regaining their bearings, they reached their first destination, the Dalles. Here they were able to sell two cattle for enough money to get to Portland, Oregon, then just a small village. Shortly after arriving in Portland, Alonzo found general labor work, however, not what he anticipated, because he wanted to practice law. However, his legal degree would prove useful later. After a few years of odd jobs traveling the Portland area, Alonzo and his wife settled in Vancouver with a small daughter, Bella..

The first Vancouver record of Alonzo is an 1868 newspaper clipping where his law practice is mentioned in an advertisement. The first official record of Alonzo in Vancouver is in the 1870 Federal Census. He also had a connection to Samuel W. Brown, an early Vancouver pioneer and land baron, who himself hailed from Galesburg, Illinois. Besides their Illinois affiliation, both men were involved in city government and land development. Although records are sparse, Alonzo most likely acquired the land from Samuel Brown who owned hundreds of parcels at that time. Alonzo’s interest in land development is further noted in an 1869 newspaper article where he is the contact person for subscribers of a proposed map of Washington Territory.

After establishing himself as a citizen of Vancouver, Alonzo soon immersed himself in the city. He founded the Washington Trust Investment Company and dabbled in other political and government entities, mostly pertaining to law. In 1872, he was elected as the city’s prosecuting attorney. His involvement in the development of early Vancouver gave him enough power and wealth to construct a

noble house. Research at the Clark County Auditor’s office revealed no documentation of a house on the property prior to an 1874 deed when the house was in Alonzo’s possession and transferred to Charles Brown (the house’s current namesake).

The house must have been constructed in the late 1860’s and architecture would lead one to suggest Alonzo as its builder due to his east coast/Midwest connection as well as his importance in the city during that time. Alonzo, being of pioneer and adventurous spirit, probably wanted to display his professional and cultural status when he built the house, adding some allure to the local frontier- territory. It was likely one of the first grand houses of in Vancouver, and surely the only of its kind.

However, a second strain of evidence suggests the house perhaps was built by Samuel Brown, father of its current namesake, Charles Brown. An article written by Clark Brown (no relation to Samuel or Charles Brown) in 1946 appeared in the Columbian, detailing a brief history of the house. In the article, Brown notes Samuel Brown as its builder, but doesn’t provide any backing evidence.2 Again, the research at the Clark County Washington Auditor’s department turned up no documentation of the house prior to Alonzo’s stake in the property. For now, the stronger evidence points to Alonzo as the original builder, because of his East Coast heritage.

French Second Empire architecture peaked in popularity 1855-1885, during the reign of Napoleon III. The style is named for Francois Mansart (1598-1666) who

is noted by historians as the Father of French Classical Architecture. The house includes a typical two-story wood frame structure with shiplap siding. Shiplap siding is defined when the profile of each board slightly overlaps the board next to it, creating a channel that gives a shadow line effect. It provides excellent weather protection and requires little maintenance.

The Brown House features other quintessential Second Empire flavor. A “door to nowhere” sits above the front porch. It is likely this was used not as balcony but a furniture entrance or lift due to the fact that the winding staircase narrows at the top making it difficult to bring up furniture. The mansard roof, which has two slopes to allow extra roof space for the attic rooms, has Victorian hooded dormer windows with flat scroll cut saw surrounds. The steep sides of the roof were designed to increase living space in the attic. A tax pertained to homes based on the number of stories when Napoleon III rebuilt Paris but attics were exempt. The steep sides of the roof added another entire story without the corresponding tax. This style of roof resumed in the United States when French Second Empire architecture gained popularity in the mid nineteenth century.

To this day, many original remnants of the house remain intact. These include a large water cistern, an exterior window once representing an icebox as well as original window and door hardware.

However, the most intriguing remnant may be the stairway banister. The banister is anchored with a newel post. A newel post is often a decorative post at the

end of a stair. Many included lathe-turned round posts, similar to the one that exists in the house. Many of these are hollow inside. A quote from the Old House Web describes the folklore surrounding these posts in more detail.

“The most frequent stories about voids in large newel posts describe them as being a chamber for important house papers, like the deed for the house or the architectural plans. Some posts are topped with a decorative cap or finial and when it finally comes looses, reveals a small compartment”3.
One has to wonder if there are secrets to the key of the house’s origin hidden in the banister.
Cook Leaves for California

Alonzo’s time in Vancouver was brief. He left in 1874 and ventured south to California, eventually founding the city of Garden Grove later that year. Around the time he left for California, his health began to fail. In order to educate himself on his ailments, he began to read medical books and became interested in medicine. He enrolled in classes at the Cooper Medical College in San Francisco (a predecessor to Stanford Medical College) as well as Hahnemann Homeopathic College in Chicago, eventually becoming a physician. In conjunction to his new title as doctor, Alonzo carried forth his amusement of purchasing and selling land, a recreation he most likely learned from Samuel Brown while in Vancouver. In H.C Head’s book “The History of Garden Grove’” he described Alonzo as “A doctor by profession but a dealer in land by avocation”.

Attempts to locate a photograph of his homestead in Garden Grove have been unsuccessful, as the original land has been developed over time. Interestingly

though, a description of his house appears in Head’s book “It was a two story house and actually painted so that it was quite a mansion for those days.”4). Perhaps this home was French Second Empire architecture also? Alonzo eventually returned to the State of Washington to pursue interests in other enterprises, living his elder years in Olympia until his death in 1932.

Alonzo undoubtedly left a legacy that continues to intrigue and leaves room for unanswered questions. As the current owners of the house, Stahancyk, Kent & Hook, embark on an extensive remodel this year, maybe some hidden secrets of the house’s origin will be uncovered. Who knows what remnants from the past will be revealed during the next phase of the house?

Vince Roman is the Client Relations Advocate and Historian for the Vancouver office of Stahancyk, Kent & Hook. Born and raised in Astoria, Oregon, he currently resides in the historic Goose Hollow Neighborhood of Portland. His interest in genealogy and history was the inspiration for this story. He has traced his own lineage back hundreds of years in Sweden and Finland. This is Vince’s second story for the annual related to the Charles Brown House. His first story “Forgive Me If You Can” appeared in the 2011 edition. 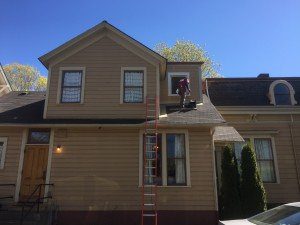