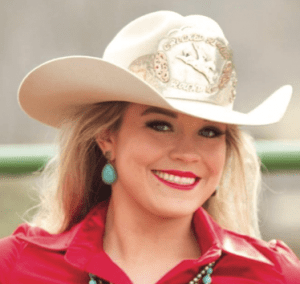 We are proud to introduce this year’s Crooked River Roundup Queen, Kayla Vincent.

The daughter of Sue Ellen and Ron Vincent and the older sister to twin boys, Kayla was raised on her family’s farm and ranch and has been involved in almost all things equestrian since she was born.

“Being raised on a ranch, I was taught at an early age how to help out around the house. Whether it was moving irrigation pipe or doing other “honey-do” projects, as my mother calls them, we all stayed busy,” Kayla says.

After the Roundup festivities come to a close, Kayla will set aim for Miss Rodeo Oregon in August. If she takes home that title, Kayla will complete another year of Roundup royalty engagements, and carry out her dream to represent rodeos and communities statewide.

A Madras, Oregon native, Kayla graduated this month from Western Oregon University, where she left with a major in math and a minor in biology.

Along with staying occupied with all her rodeo commitments, Kayla looks forward to the future and what possibilities lie ahead for her. “I haven’t decided what I want to do with the rest of my life, but I’ve considered living in a larger city to follow a career. I am not the world’s best driver in busy traffic, so I would have to work on that! My ultimate dream would be to live in a small town out on a chunk of property where I couldn’t hear my neighbors. After living in an apartment during college,” she said, “I realized how much I took this for granted growing up!”