Apply to be a client
Home > Attorneys > Kenneth C. Goodin

A native Oregonian, Ken believes that thorough case preparation is the key to winning or negotiating the best outcome for his clients, which is his number one goal. Meticulously and methodically preparing his clients’ cases, Ken builds a foundation for a winning legal argument integrated with carefully researched legal precedent. Hard work is the cornerstone of Ken’s practice.

Ken is also deeply devoted to his clients and takes a personal interest in each case. “People going through a difficult divorce or custody battle can get frustrated with the ‘system.’ They need the assistance of an attorney who cares about what happens to them. Someone who can explain the process and keep things moving forward,” he says. “I work hard to move clients past their difficulties, so they can get on with their lives. It makes me feel good when I can lift that burden from their shoulders.” Ken has a proven ability to keenly assess each client’s situation and tailor an approach best suited to a successful outcome.

Since establishing his practice with SK&H in 2007, Ken has successfully litigated hundreds of cases involving business interests and valuation, custody and parenting time, child support and spousal support. Each case requires attention to detail and Ken particularly enjoys and excels at analyzing and resolving complex property division and large asset cases.

Ken worked his way through law school as a law clerk at the Eugene law firm of Jaqua & Wheatley, where he gained valuable hands-on experience managing complex insurance defense cases. Prior to working for Stahancyk, Kent & Hook, Ken worked for the State of Oregon Employment Department as an Unemployment Insurance Adjudicator.

Ken is a member of the Oregon State Bar and a past President of the Deschutes County Bar Association. Ken is also a member of the Central Oregon Matrimonial Attorneys and the Inns of Court.

Ken has always believed in making time to give back to his community, particularly on local issues related to youth and the environment. As a young adult, Ken volunteered for the Green House shelter for homeless teens in Portland and as a Volunteer Forester for the United States Forest Service. During law school, Ken performed pro bono work for Lane County Legal Aid. Ken also served for 5 years on the Board of Directors of the Education Foundation for Bend-LaPine Schools, including two years as Vice President of the Foundation.  The Education Foundation for Bend-LaPine Schools helps support Bend-LaPine School District Students through activity fee scholarships and classroom grants.  Ken also believes strongly in assuring that children have a voice in court and regularly accepts court appointments to represent children pro bono.

Ken keeps informed on community issues by regularly attending Bend Chamber of Commerce events, EDCO ‘Pub Talks’ and is a member of the City Club of Central Oregon where he participates with other local professionals and business leaders in monthly round-table discussions about business and civic issues affecting Central Oregon.  Ken has also volunteered as a ‘Big’ with Big Brothers / Big Sisters of Central Oregon and with the Deschutes Land Trust, helping to clear invasive plant species from sensitive wild areas in Central Oregon.

Ken and his family are fervent outdoors people, spending as much time in the great outdoors of Central and Eastern Oregon as possible. Depending on the season, you’re likely to find Ken mountain biking, skiing, hunting, or fishing (although he has accepted the fact that he will often be out fished by his competition-level fly fisher wife, Michelle). 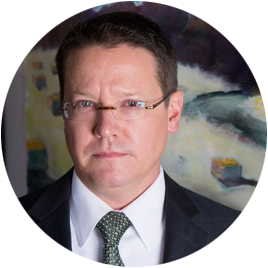